You would have to be hiding under a rock if you hadn’t seen or heard what has transpired over the last 48 hours in the US. The Presidential Election which has gone on FOREVER is finally at a close, with a not terribly popular (ironic, given he’s the winner) result.

The media, bloggers, journos – hell, everyone in social media land – has gone crazy reporting every minute detail about the outcome, including their own fears and freak-outs about what it’s going to mean for America and the rest of the world.  And whilst I have to admit that when I first heard that Mr “You’re Fired” is now a world leader I almost choked on my protein ball, I have to say I didn’t immediately go into “the world is going to end” mode.

Little known fact: I’m actually an American citizen. I could have voted in this election. But I chose not to. One, because I don’t live there and postal votes only get counted if it’s looking like a tie, and two I wasn’t informed enough about the individuals and their parties to know what they actually stand for.  I’m not an idiot, so on the surface I could see that Trump was a pretty revolting choice. His ability to shoot his mouth off and offend an amazing cross-section of the community is quite remarkable to say the least.  But I felt like a hypocrite voting for just anyone in defiance of him, given I have little idea about what their policies would do for the larger population.

Now, I have some friends in the US who are genuinely concerned about what Trump as leader is going to mean for them.  And I get that. Big time. But they are white and middle-class, so by luck or good fortune, they are not really in his sights. However, I completely understand their nervousness about the future of their country and the possible backlash from the rest of the world.  It is unsettling to say the least, and terrifying at worst – if he actually manages to pass any of his ridiculous notions.

What I’ve found really interesting in the wake of the result though, is how many people are running around here worrying about what Trump as President means for the Australian economy and what it means for their financial future. Yes,  our economy has strong ties to the US, and yes we have diplomatic alliances, but, I don’t mean to buck the trend, who cares?

So my friends, I urge you to stay positive and focus on the things that matter to you and that you can control. I’m not suggesting you bury your head in the sand and pretend it will all go away. Nor am I saying don’t throw your arms up in despair at the injustices of the world. Just please, don’t get stuck in that place.  If you’re fiercely opposed to something then do something serious to work towards a solution to that thing. Just grumbling about it won’t enact change. Otherwise, work on the things that create a positive community where YOU are and continue to do good work that will influence people in an uplifting manner.

It’s been said that ‘attitude is a little thing that makes a big difference.’ And I couldn’t agree more.  Your mind is a powerful tool, full of thoughts, and it’s those thoughts that produce action.  If you think positive thoughts, your actions will more likely propel you towards positive goals and outcomes. Produce negative thoughts and the opposite will be true. Bitching about people or situations that you can’t control? That shiz is gonna come back to you bite your arse.

Just 5 minutes in the morning before you jump out of bed, or 5 minutes in the evening just after sliding under the sheets is all it takes to change your mindset. Set yourself some goals – financial, personal, health – and then listen to your thoughts when you ask yourself about them. If the thoughts are negative (I’ll never make enough money to leave my day job, I’ll never have $1m in the bank, I’ll never lost those last 5 kilos), then acknowledge them, and name them. Don’t beat yourself up over them – this is the first step in moving forward.

You may then have to force yourself to think positively, if it’s not a natural state of affairs for you. But like anything, the more you practise the better you get at it. Start reframing the thoughts: how can I make $1m? What can I do to make my first $1000? How can I change my exercise habits? Can I start to eat differently without feeling like I’m missing out? Your brain is extremely complex and will naturally start to find solutions to a problem if you start asking the right questions.

And finally, surround yourself with positive people. Not those annoying types who exude false positivity and speak in homilies and quotes all day long (*eek* – we all know one of them don’t we??) , but genuinely positive people who support your vision, challenge you to grow, and who are alongside you for the ride. Hanging out with negative Nellies and Chicken Littles is exhausting and debilitating.

So, don’t go worrying about Trump. Don’t go freaking out about the future of America or Australia or the world at his hands. Go find something really useful and powerful and positive to do in YOUR community, tribe or family. Go and do THAT and see what kind of life you can carve out for yourself.

Your future is yours to determine. 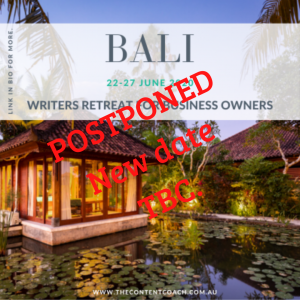