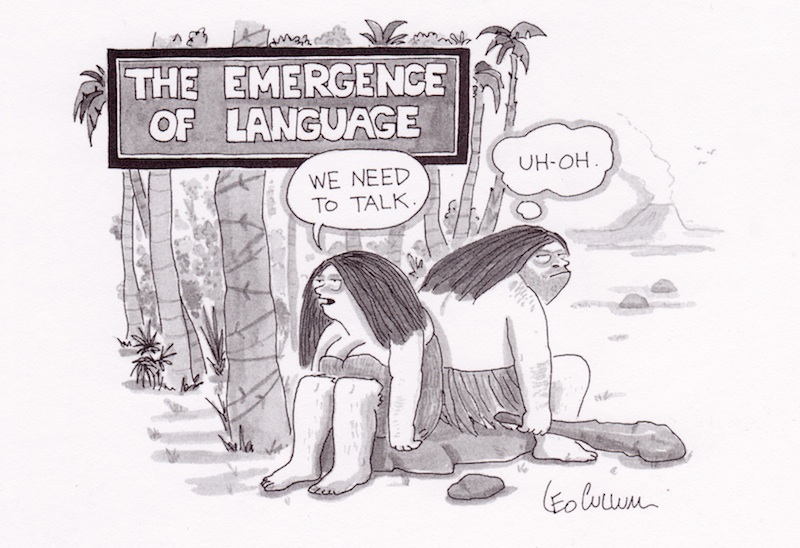 I had a very interesting chat with Master 4 the other day. It went something like this:

“Because I taught you. And so did daddy, and nanny and poppy, and your sister. Everyone that is around you and loves you has taught you to talk. We speak to you, you listen, and you connect the words to the thing or action.”

“So, who taught you to speak then?”

“Nanny and poppy and my teachers.”

“Ok, then. So who taught them? And who taught those ones? And really mummy, who taught the first person EVER in the world to speak? They didn’t have anyone to teach them?? And why did they just make up sounds and give names to stuff like TREE. How did they know that was supposed to be called a TREE?”

This kid is a constant source of inspiration for me. He questions everything and has the most inquisitive mind I’ve ever met. He’s lateral, he’s literal, then he’s beyond imaginative. He thinks deeply AND broadly for a kid his age. And it’s awesome. Except when I get stumped.

So it got me thinking about the origins of language. Who DID teach the first person to speak? And why do we call a tree a tree?

WHO SPOKE THE FIRST WORD

Regardless of whether you believe we are upright apes or descendants of Adam & Eve, there is a curiosity about where our language came from. Why do we call certain things, certain names? How did language begin? After all, words don’t leave artefacts or fossils behind (writing began long after language did), so theories about how language began have generally been based on hunches.

Scholars have tirelessly debated the origin of language in the human species for several centuries. Despite the rigorous debate, the search has been fruitless.  The reason? We weren’t there! No, really, there is a serious lack of direct evidence to prove or disprove any of the theories, and as a result many linguists and archaeologists have simply given up.

SOME THEORIES OF THE ORIGIN OF LANGUAGE

There are a bunch of hypotheses about how, when, where and why language might have emerged, one of which is that the human language is closely related to the systems of communication used by other animals, in particular primates. But noone appears willing to hang their hat on this one. Here are some other rather interesting ones, nicknamed by language scholars fed up with unsupportable stories.

The suggestion here is that speech arose from people imitating the sounds that things make, for example bow-wow, moo. The thing is, very few things we talk about have characteristic sounds associated with them nor do many of our words sound anything like what they mean.

This theory suggests that speech may have come from automatic vocal responses that humans have to joy, fear, pain or other emotions. For example a shriek, a gasp, a laugh. But plenty of animals make these kinds of sounds too, and they didn’t end up with language.

This is a really unusual one….where the idea is that speech somehow reflects the mystical resonance or harmony connected with things in the world. Hmm. Not sure how you’d prove this one.

The the “ta-ta” hypothesis suggests that the development of sound was started to support the hand gestures and movements of an individual. So speech came from the use of tongue and mouth gestures to mimic manual gestures. For example, saying ta-ta is like waving goodbye with your tongue. But most of the things we talk about do not have characteristic gestures associated with them, much less gestures you can imitate with the tongue and mouth.
More recently scientists have picked up the debate again, but this time using evidence from palaeontology looking at physical factors such as brain and vocal tract features of early humans and hominids. Rather than speculate about which kinds of vocalizations gave rise to speech sounds, they consider which physical, cognitive, and social factors must first be in place in order for there to be language.

This doesn’t make the explanation to Master 4 any easier, but it does make you appreciate that whatever those necessary factors are for creating language, we’ve obviously got all of them!  The ‘hardest problem in science’ may not be answered yet, but thankfully there’s a new generation of thinkers on the way who may just be able to solve the puzzle.

1 Comment → The origin of language: a 4 year old boy’s musings